Accelerate your financial independence with renting a room in Ireland

Buying is cheaper than renting

Rents in Dublin are quite expensive, especially in South Dublin and close to the city center and they keep increasing. There is a significant difference between what the rents were in 2015 and are now even with the rent control. Renting isn't necessarily bad - it has its advantages, e.g. you don't have to worry about the surprise repair costs, you can move easily. But financially in Ireland it's not the best bet. Compared to rents, the house prices are not that high. In 2018 my partner and I decided to buy an apartment in Dublin. 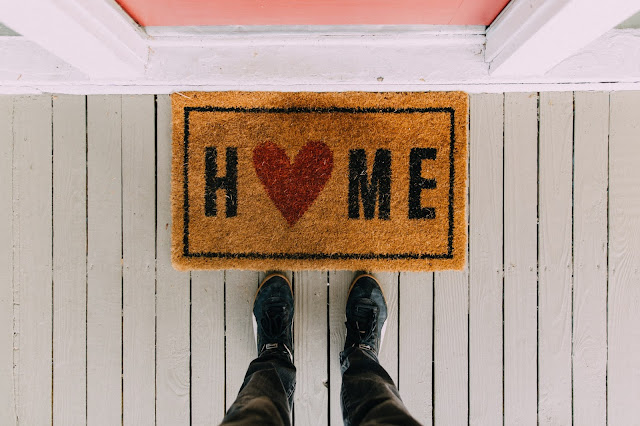 We bought a two bedroom apartment close to Grand Canal Dock area. Apartments like that would rent for something like 2000 per month (in a range 1800-2200). We paid 385000 for the apartment, which is quite a lot.  But when you take a look at the mortgage - it actually can be quite cheaper than rent.

30 year mortgage would cost us ~1460 Euro a month which is more than 500 Euro cheaper than rent. There are additional costs of having an apartment though - property management (service fee) 1800 a year and misc repair costs of 300 a year. 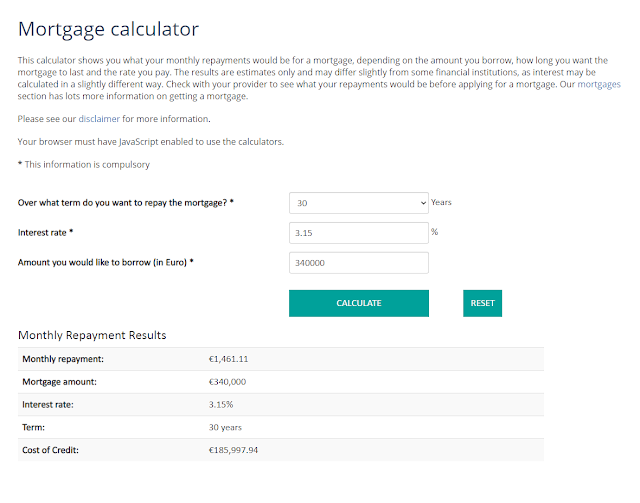 Financial costs of owning a house per year:

This is almost 5000 a year difference!

Paying off the mortgage also builds the equity, so not only your monthly cashflow increases, you are also building wealth How much equity will you build up in your first year assuming payments like above? If the interest accrued yearly, in the first year you would have paid roughly

in interest alone! Sadly, you can't deduct the mortgage interest from your taxes. How much equity will you build in the first year? It would be equal to total payments - interest:

Is this as good as it can be? We could have for sure bought in some cheaper neighborhood and end up with lower mortgage, but we bought a place to live in and we could afford it. In real life we also took a shorter term mortgage - 15 years instead of 30 and we are on top of that making additional payments.

Renting a room will supercharge your housing cost savings

We decided to go a step further and get one of our bedrooms rented. We live in a popular area where rooms rent for even 1000 euro a month and there is an amazing tax incentive for doing that. It's called rent a room scheme and you can learn more about it on citizensinformation.ie. You can get up to 14000 euro of rental income from renting a room in your residence and not pay any tax from it.

We currently rent for about 950 euro per month, generating 11400 of additional tax free income per year! We are both in a very high tax bracket (good problem to have), and if this was a regular income it would be taxed 52%. We would have to get a 22k euro raise at work to get the same amount of net additional income.

This is divided between two people. And on top of that we are building the equity in our apartment.

As renters we would have spent 24000 a year on housing a basic apartment. Each year the rent could be increasing up to 4%.

As owners who just own in the first year we would have spent ~19620 (which would not increase with time) and we would build equity of about 6810 (which would become higher and higher each year). So our net worth would be reduced by about - 12810 due to housing.

This can have quite an incredible impact on your wealth building over the years. If you have less outstanding debt, you might even be living completely for free. This is very powerful.

Is it worth the inconvenience?

Many people I know who are in a similar situation (have their own place or could afford buying one, don't have children) are not willing to rent one of their bedrooms. Why would you share your house as an adult? You finally have the money to have your own place and can afford it.

What would you lose renting a room? If you don't rent it you can use your second or third bedroom to store your stuff (this is what most couples renting 2-bed apartments do) or make it your office or exercise room. The office option seems especially attractive during the 2020 Covid-19 pandemic.

Spare room can also be used for hosting guests. The ability to host guests was one of my concerns, because once in a while I would have my parents visiting from abroad and I know it would be hard for them to afford a hotel in Dublin. I decided that it would be financially smarter to rent them an airbnb or a hotel room for their stay once a year than to loose on a whole a year of rental income. Alternatively, instead of visiting, we could travel to new places together and split the costs of accommodation that way. So far in 2 years my parents haven't visited though, so that was never really a problem.

The other concern is privacy and comfort or not getting along with your flatmate. Well, this can't be ignored, but from my experiences people can get used to a lot of things. When I lived in a dorm I shared a room and even though it wasn't the most fun all the time - I was fine. When you are renting a room to someone, at least you can pick your flatmate. From my experience so far it's been great, we've quickly adapted to having an additional person in the house and became friends. 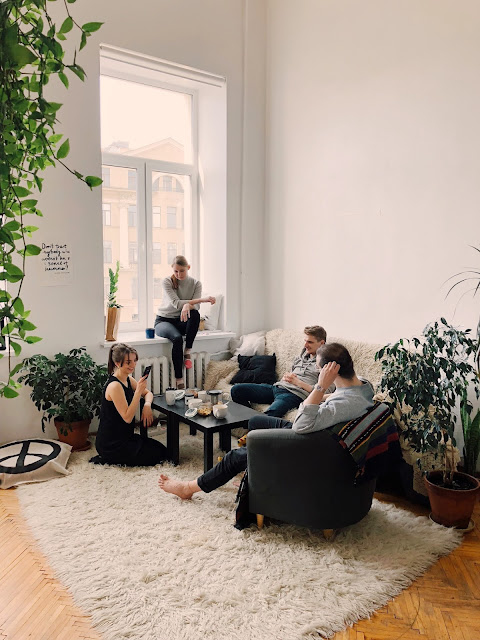 If you haven't bought a place yet, you can optimize the purchase with renting a room scheme in mind. For example you can buy a bigger place if the amount of space is a concern. The so called independent attached units, are also eligible for the rent a room schema and can provide you a full privacy from your tenant even if they live under the same roof. It the house doesn't have such unit - you can build one and it might have great return on investments.

As with any tenant, there are certain risks (a flatmate or a tenant in a standalone rental unit). As long as you screened your tenant you should be fine and in a way, leaving under the same roof reduces the risk that the tenant will damage the property. You can protect yourself from that with a deposit or insurance. It might be possible that they turn out to be a serial killer, but that could happen with anyone who you invite to your house.

It took as about a month to find our flatmate and since then they've been happily renting a bedroom from us and after a year they extended the lease. So since it was first rented we had 0 vacancy so far.

When it comes to additional costs, we have bought some furniture for the rented room and our bills are probably a bit higher now. However those are small enough, they probably can be ignored for the sake of this post.

If you are familiar with the financial independence movement, you've probably heard about the 4% rule. In other words, according to this rule the amount of money you need to safely retire is about 25 times your cost of living. This amount is also often called a FIRE number. How would renting a room impact that number?

Let's compare the renter vs an owner who rents a room used in the examples above.

The renter spending base spending for housing would be 1000 euro per person per month.When a person owns and sublets a bedroom, we have a monthly housing cost of 342 per person per month. This makes the difference of 7896 a year and 197400. Buying a place and renting a room could lower your FIRE number by almost 200k euro. This is quite incredible.

And this doesn't include building the equity that you could later cash out. We just take into account the fact that mortgage is smaller than rent and that you are getting additional tax free income that offsets that cost further. We also don't take into account that the mortgage will be at some point fully paid off. I would say that this is totally worth the opportunity cost of the 10% deposit.

Will we do this forever?

In real life a young couple probably wouldn't be subletting one of their bedrooms forever - with time the priorities change. There is also no guarantee that the tax incentive scheme will last. As of now, we have found a great flatmate and we are planning to continue to rent our spare bedroom for next couple years. We are relatively young and are not planning to have children anytime soon, so we can continue doing this for next couple years for sure. It will for sure supercharge our journey towards financial independence.

You can learn about the legal aspects of renting a room at citizensinformation.ie website. I'm planning to write additional posts that will describe the details of our journey of renting a room, such as finding and verifying the flatmate and drafting a contract. Stay tuned!

Popular posts from this blog

December 31, 2020
There is no doubt that stocks can be a great investment. Compared to other asset classes they are pretty easy to acquire, there is no need for tens of thousands of euros for a downpayment, they don't require debt and are very passive. They give us an opportunity to be invested in businesses without having to create those businesses. Last ten years were great for the stock market, even the coronavirus crisis didn’t depress the market for long. This doesn’t mean that the great returns will continue forever, but still the long term outlook for the overall market is great (long term stocks tend to go up as economies grow) especially if we look globally. The problem is that while picking the individual stocks, you might not be able to capture the overall market trend. You might pick the stocks wrong and the price might drop and never recover, or the company simply gets bankrupt. You might pick up a great company, buy it cheap (below intrinsic value), but still not earn money on it for m
5 comments
Read more

What is net worth and how to track it?

January 30, 2021
I started tracking my net worth at the end of 2018 and since then I updated it about 28 times. It has been very useful to me and in this post I would like to encourage to start doing it too. What is net worth? Net worth can be defined as your assets minus liabilities. Here are some examples of assets: cash stocks house expensive items, e.g. a car, a horse, a boat debts other people have to you And now some examples of liabilities: car loan student debt mortgage Net worth shows your overall financial picture and the changes in the net worth show you if you are on the right track. For example you could see that you accumulating wealth or getting deeper in debt. Why track it? If you start measuring something regularly, you will  instinctively try to make that number go up. You might end up thinking twice before blowing money on an impulsive purchase or tweaking your budgets so you can save and invest more. And since to track your net worth you need to log into all of your
Post a Comment
Read more